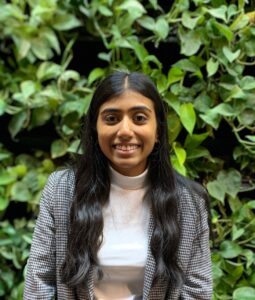 In the following article, Project Someone Research Assistant, Ramya Panchachara (pictured above), discusses her work on former extremists’ perceptions on the role of education in the prevention of radicalization and violent extremism.

When we hear the term extremists, we often think about radical groups far away. Yet, we experience extremism in our very own communities. Although often overlooked, right-wing extremists in Canada have had lasting impacts on social development.

Over the summer, I had the opportunity to work as a research assistant with Project SOMEONE alongside Drs. Maxime Bérubé, Vivek Venkatesh, Méi-Ra St-Laurent and Olivier Arvisais. There, I was able to further explore former extremists’ perceptions on prevention strategies and radicalism at large. Specifically, the research focused on better understanding the role of pedagogy and education in preventing radicalization and violent extremism through the perspective of former extremists. My task on the research team was to analyze studies on pedagogical approaches to preventing radicalism and extremism among youth.
Additionally, I examined these notions by analyzing data collected from ten open-ended interviews with former right-wing extremists. Founded on their lived experiences and beliefs, the study currently being developed aims to explore the formers’ perceptions of the role of education and pedagogy in the prevention of radicalization and violent extremism. The study of the data collected from these interviews revealed four overarching themes linked to the role of education in different stages of the former’s lives. These included upbringing, radicalization process, redirection process and post-radicalization.

Education plays a significant role in guiding youth and adolescents through both formal and informal structures. Formal education refers to the notion of organized learning. In educational institutions, youth and young adults follow structured curriculums. In contrast, informal education refers to learning through activities and interests of the individual and third parties such as friends and family. Data collected from the interviews showed that many formers identified the different formal and informal education impacts throughout the four stages. For instance, informal education through community involvement and social groups played a large part in many formers’ redirection process.
As the project progresses, it demonstrates the need to continue investigating the development of practical pedagogical programs focused on the prevention of radicalization among youth. The most effective prevention strategies are to encourage diversity, allow for open dialogue and promote inclusivity.