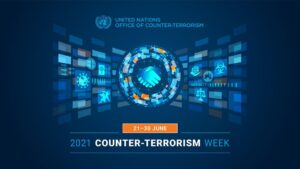 In his role as UNESCO-PREV co-chair, Project Someone director Vivek Venkatesh recently moderated a panel discussion as part of the United Nations 2021 Counter-Terrorism Week. Titled From online hate to offline violence: Addressing and countering hate speech and violent extremism through education in a digital world, the event brought together high-level stakeholders in government and civil society to explore the role of information literacy in countering the spread and escalation of online hate speech. The discussion was co-organized by UNESCO, OSAPG (UN Office on Genocide Prevention and the Responsibility to Protect), OSRSG-VAC (UN Special Representative of the Secretary-General on Violence Against Children) and UNOCT (UN Office of Counter-Terrorism), in partnership with the Kingdom of Jordan and the Kingdom of Norway. Speakers included UN officials working in the fields of counter-terrorism, violence prevention and education, Facebook’s head of counterterrorism policy for the EMEA, Norway’s Minister of Justice and Jordan’s Minister Plenipotentiary. Advocating for a “whole-society” approach to the issues of hate speech and violent extremism, the speakers explored prevention efforts that both center the educational realm and extend well beyond it.

Watch a recording of the event.