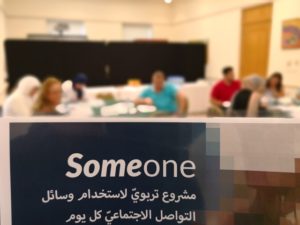 Project SOMEONE in Lebanon has as its main objective the prevention of hate on social media platforms. With its 11 projects developed by collaborative research practitioners, we offer the Lebanese civic community a variety of curricular activities meant to open dialogue on understanding and building resilience against hate speech. While doing so, SOMEONE tailors those projects to best suit the needs of the community with which we work.

Since April 2018 we have partnered with five local Lebanese NGOs who represent different minority groups. These include special needs individuals (Youth Association of the Blind and the Inclusion Network), women (Collective for Research and Training Development Action), Syrian refugees (Basmeh and Zeitooneh), Palestinian refugees (Majed Abu Sharar Media Foundation), and youth in K–12 settings as represented by Heritage College. 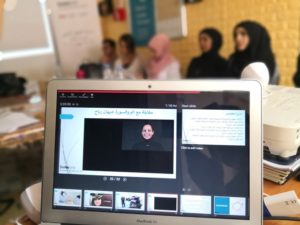 The workshops focus primarily on critical digital literacy and social pedagogy in an aim to build capacity and empower Lebanese communities. After undergoing a rigorous needs assessment, contextualization of all SOMEONE workshops were deemed a key component of the interventions. The latter involves the active participation of head of NGO organizations, co-developers, and co-facilitators from the fabric of the Lebanese community in the development, implementation, and the contextualization of all workshop materials. Following this strategy ensures that the voices of the minorities are heard through local case studies and storytelling that participants will be able to relate to easily.

There are 4 types of workshops, 16 in total, locally in Lebanon. The first type targets school teachers and is titled Digital citizens of Tomorrow. Five workshops took place from July to mid-October 2018 with a total of 86 participating teachers who have an impact on secondary stakeholders in schools all over Lebanon. The second type of workshop targets social workers and is titled Digital Empowerment. Four workshops took place in September and October with a total of 83 participating social workers. The third type of workshop titled Online Media and the Critical Thinker targets social media activists and aspiring journalists. Six workshops are scheduled in October and November 2018, the first in this series has already been completed with 29 participants. We hope to reach an estimated 150 young activists by the end of November. Last but not least, we have one workshop in October of the fourth type of workshop titled Web 2.0: A platform for Peace (not Hate) for 25 university professors. 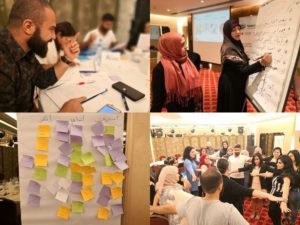 Based on the evaluations to date, the workshops have been a resounding success. Participants echo the need for subsequent in-depth workshops about the issues discussed. Many participants reported that it was the first workshop of its kind in Lebanon that they have participated in. They especially appreciated the novelty of the topic, interactive aspects of the sessions, and the sharing of experiences, benefitting greatly from the collective intelligence of the group in tackling online hate and ways to combat it.

We administer a pre-test and a post-test to assess the outcome of the workshops and measure the skills acquired by the participants. We also administered evaluations at the end of day one and day two to assess the reaction of the participants to the workshop. Based on these evaluations, we will generate recommendations for preventing online hate through direct engagement with Lebanese communities.

We are also assessing the impact of our training on secondary stakeholders during the first quarter of the year 2019. This evaluation phase will be planned with the Lebanese partners during November and December 2018 trips to Lebanon.

To read more about our work with our partners in Lebanon, click here and here.