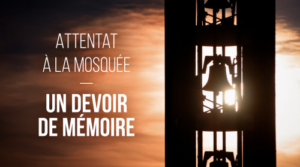 Five years ago, on January 29th, 2017, a terrorist attack was perpetrated on the Islamic Cultural Center of Quebec City. Six people died as a result, and many others were severely wounded. A new documentary by Catherine Leblanc paints a vivid and current portrait of what has changed in Quebec City and in Quebec since this Islamophobic terrorist act was perpetrated. In the documentary, Leblanc interviews UNESCO co-Chairs in Prevention of Radicalisation and Violent Extremism  David Morin and Ghayda Hassan. Please note, this documentary, “Attentat à la mosquée, un devoir de mémoire”, is only available in French.

The documentary melds the voices of citizens and experts to discuss issues related to islamophobia and radicalisation. David Morin and Ghayda Hassan are UNESCO co-Chairs in Prevention of Radicalisation and Violent Extremism. In the documentary, Ghayda Hassan, who is a professor at UQAM in the psychology department, explains: “The extent to which the Canadian government failed to see how serious the threat of the far-right was surprising, when on the ground, we felt it coming, we knew that it was becoming more than hate speech.”

David Morin, who specializes in radicalisation and violent extremism at Université de Sherbrooke, states in the documentary that: “If you commit a jihadist attack, it’s a terrorist attack, it’s organized, responsibility is claimed. Whereas if it’s someone from here, who is white, then it’s someone who is suffering from mental health issues.”